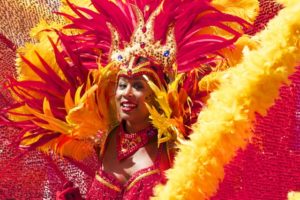 Even when most of countries in Latin America share many cultural aspects such as language, cuisine, dialects and lifestyle, there are many others that make each of the countries special and unique. One of the Latin regions where almost every country has the same history, origin and characters is South America, nevertheless, Brazil outstands. Brazilian roots have made it one of the most joyful countries in the entire world and its music has a huge role in this title.

Brazilian most important and recognized genre is the one that makes everyone go crazy and dance like there’s no tomorrow, Samba. If you hear a samba drum arrangement, the whistles and other wind instruments you’ll automatically think about Brazil, the parties celebrated in Rio during the carnivals and an amazing amount of colors and glitter like if synesthesia was acting. Samba has its origins and 1929 and among its most recognized composers there are Noel Rosa, Lamartine Babo and Ary Barroso. This magnificent genre combines tambourines, cuicas, guitars and even frying pans!

Samba has had an inspirational role to the birth of a widely popular genre, Bossa Nova. This kind of music combined the most calmed harmonies played by samba musicians and mixed them with the tranquility and complexity of American jazz. This genre has been so popular than almost any café around the world plays it to create a smooth and nice environment. The most known Bossa Nova artists from Brazil are Antonio Carlos Jobim and João Gilberto whose singles like Garota de Ipanema and Chega da Saudade respectively have spread all over the world and keep appearing in the soundtracks of many movies and series.

Of course, like in some African and South American countries, a great musical culture has some deep roots that come from a tribal past. Even when nowadays, some of the indigenous tribes of Brazil are fighting against well drilling in some parts of the Amazonian rainforest, there were better days when they dedicated to create one of the most popular music style and martial arts, Capoeira. This is one of the most beautiful kinds of music because it only requires three people that have the ability to play the pandeiro, atabaque and perimbao, the rest is a great session of jamming or a concert were the musicians play songs written by the old mestres or teachers. There can’t be a martial art session without the music.

The African influence hasn’t left its mark just in Capoeira. Maracatu is a typical Afro-Brazilian music played with alfaia drums during the carnivals in some regions of Fortaleza.

Brazilian musicians did not get stuck on the typical genres and have taken over the scene in many popular genres such as gospel, heavy metal, psychedelic rock, hip hop and other not so popular like Gaucho music that is mostly typical from Argentina, Uruguay and Paraguay.

Just like its people, Brazil is an incredible mix of cultures and roots and its typical music proves it. Don’t doubt and go listen!