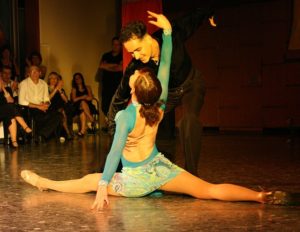 Salsa is one of the most popular Latin social dances. It’s a couple dance, but you can also dance alone. It was created by Puerto Ricans, Cubans and other Hispanic Americans. His steps have African and European influences.

The roots of the salsa do not come from a specific point but from several because this musical genre is the result of the fusion of diverse aspects of the musical culture of various ethnic groups. The term of salsa as a musical genre and dance became popular in New York at the end of the 1960s.

At first, this term referred to a great variety of rhythms with African roots from the Hispanic Caribbean. The sauce is the result of the fusion of all these Afro-Caribbean rhythms.

The main influence of salsa is the Cuban son, from which he inherited his rhythmic pattern. Also the sauce has influence of the mambo, the chachachá, the guaracha and the merengue.

The name that was given comes from a song called “Échale Salsita” and that was sung by the Cuban Ignacio Piñeiro in 1933; it not only presented a novel melody but included the trumpet in this musical style for the first time and had a more danceable touch. It is worth mentioning that in Caribbean music terms like “salsa”, “sabor” and “azúcar” have always been used to motivate the audience to dance and get excited.

The commercial success of this genre took place in the 70s, when it began to be commercialized and become present especially in spaces for dance fans. The dance of the salsa itself, its movements and steps, are a fusion of the African and the European. Their movements and steps reflect the influence of the dances brought by Africans to the Caribbean and the European dances that were danced in Cuba. The basic steps of salsa are the same steps as Cuban son. Salsa also inherited steps from rumba, danzón and mambo.

Nowadays salsa dance has different styles coming from the regions where this genre has been developed.

There is a common basic step in all styles. But each style of salsa has its own way of dancing and performing the steps.

A style of salsa can be identified by the way a dancer uses time or subjects his partner. Each style has variations in the turns and postures, and in the influences that are incorporated in other dances.

Learn all about this type of music and more here!